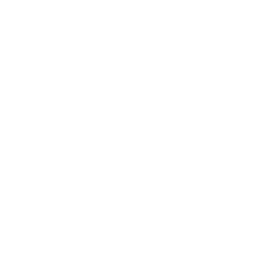 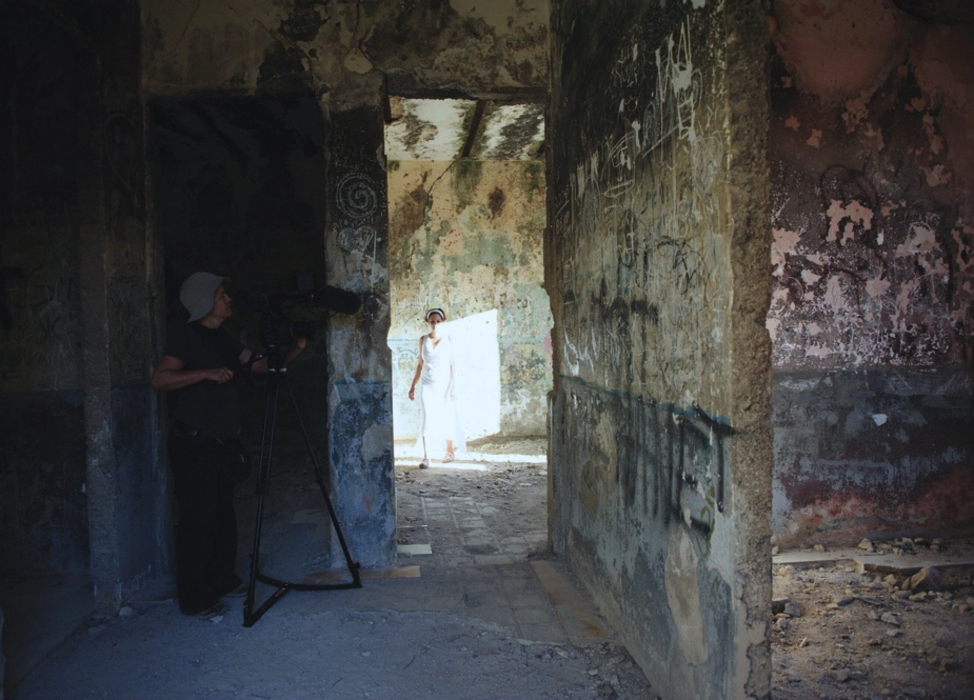 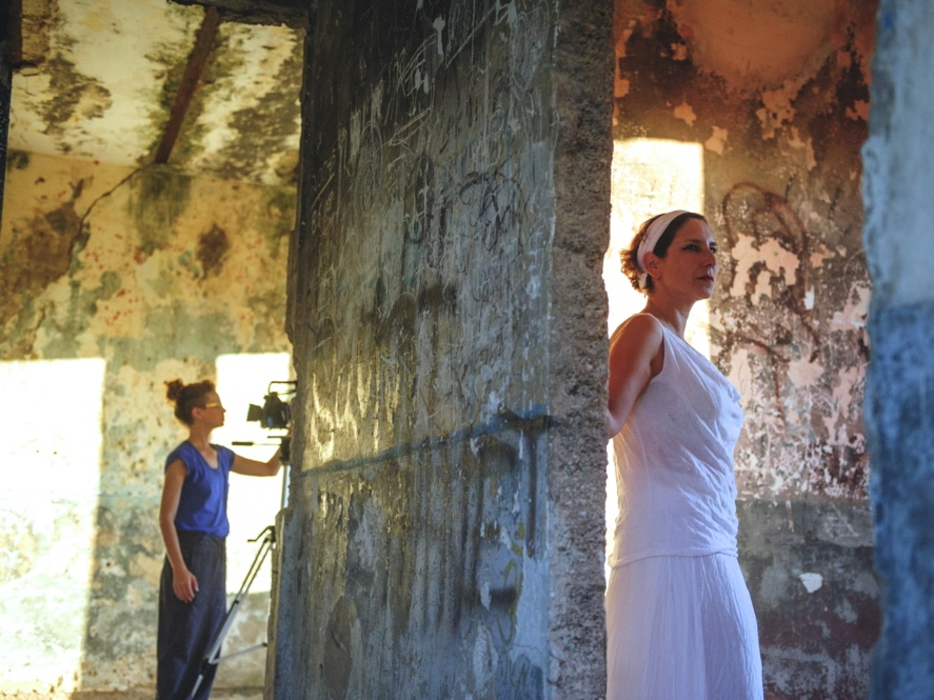 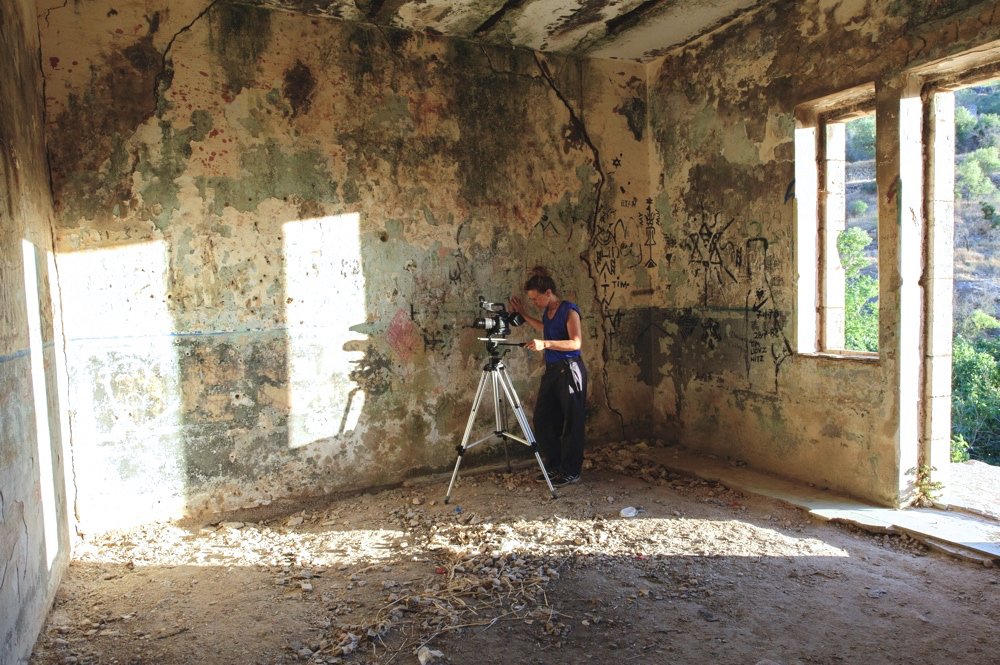 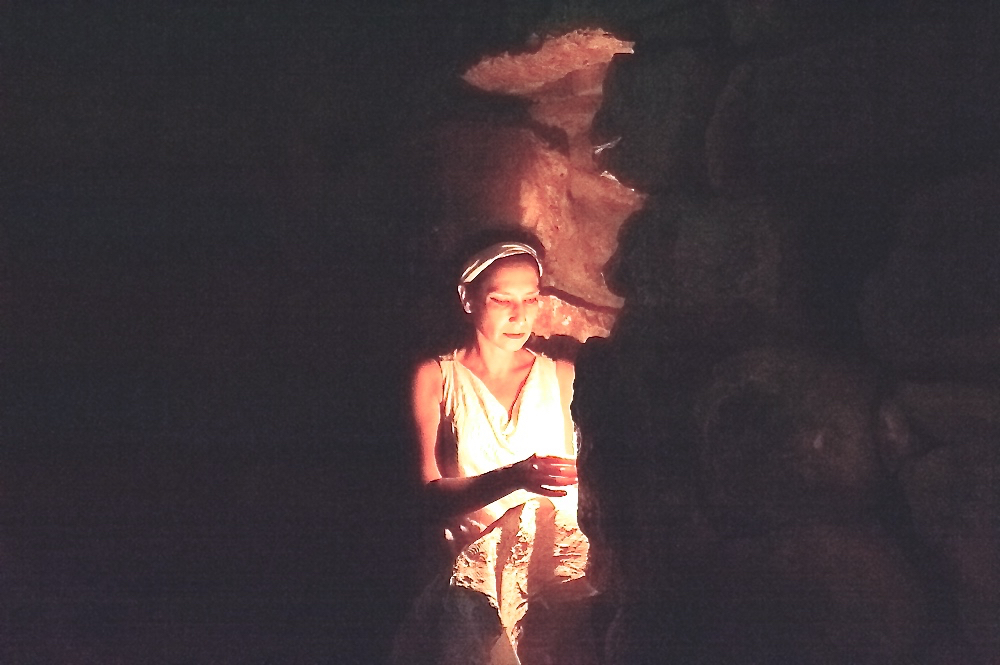 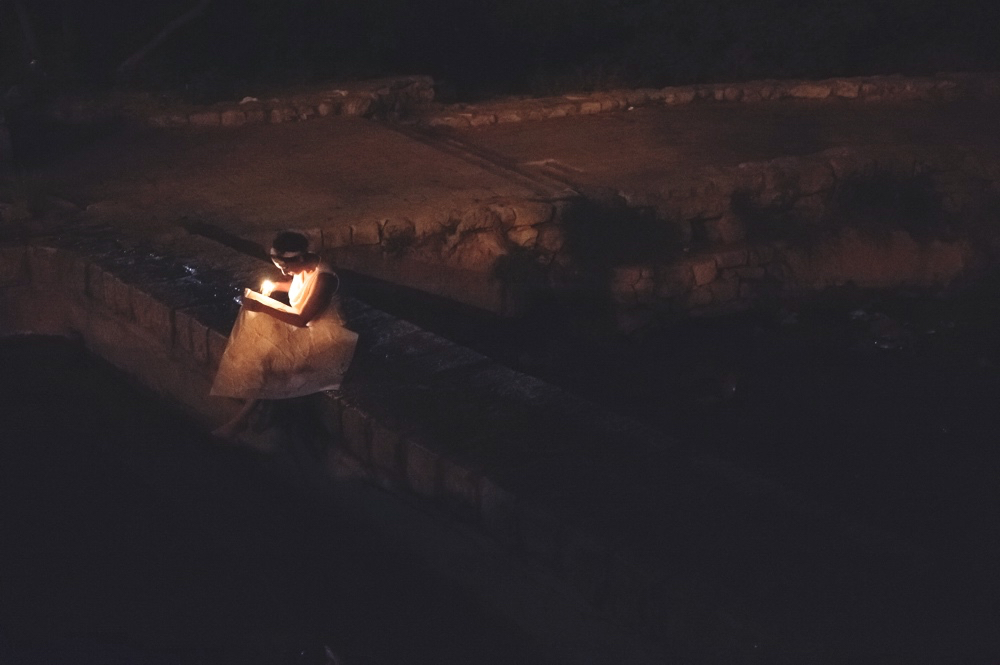 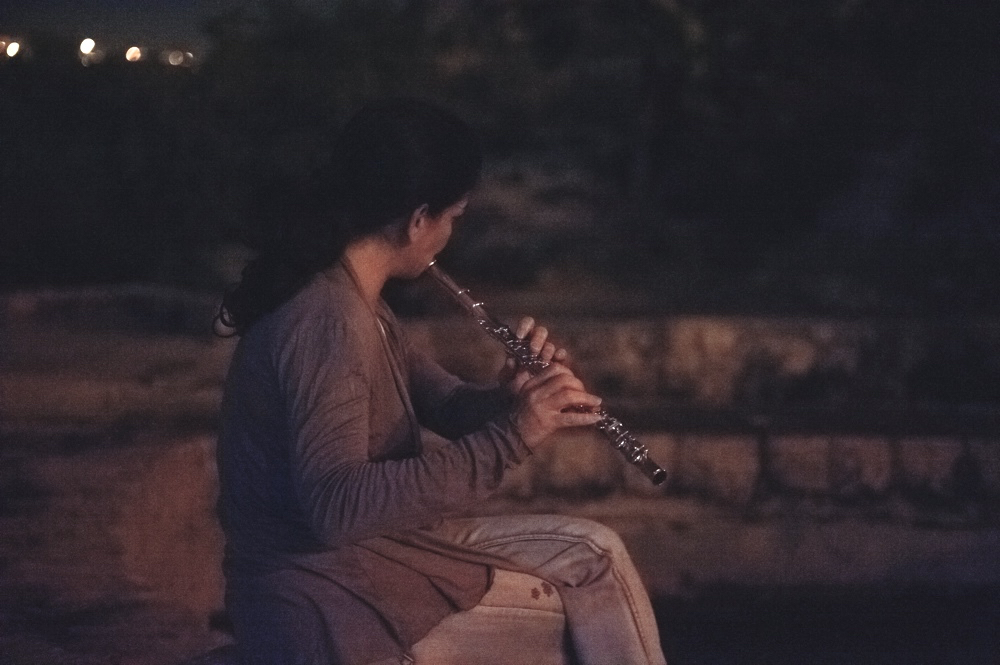 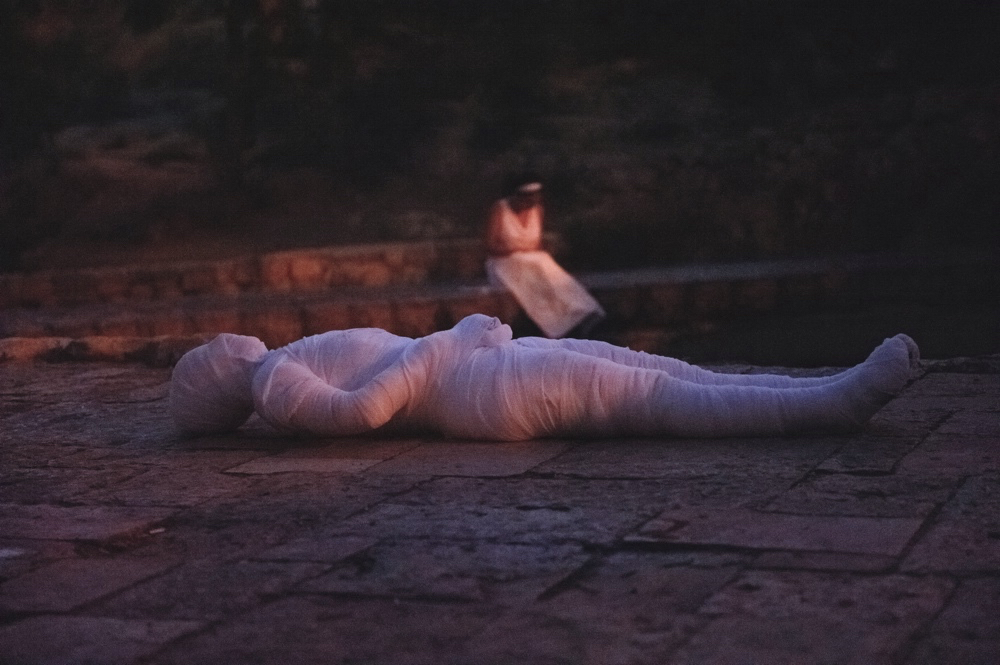 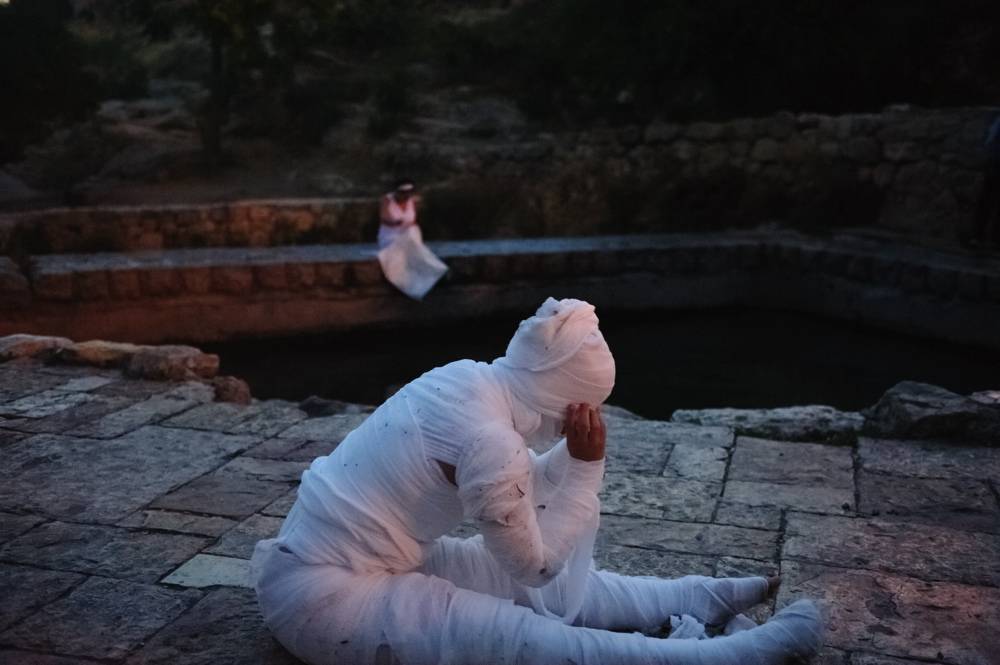 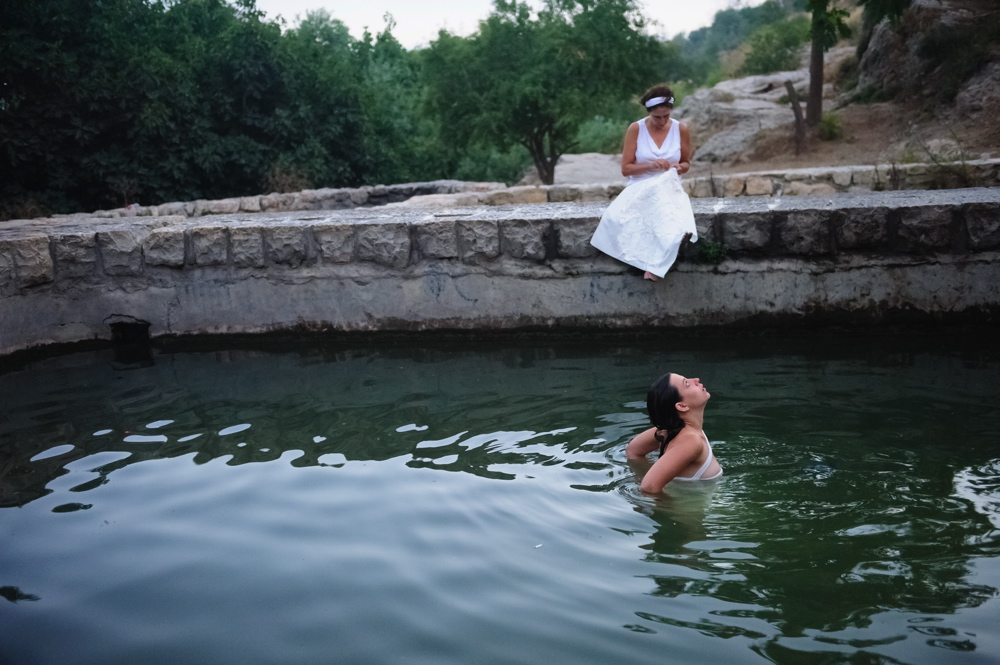 The Spring (2015) is part of performances and videos related to the Wounded Land series of works which attempt to symbolically dismantle the existential “huis clos“ (No Exit) of the Israeli-Palestinian conflict through Sisyphean and absurd acts of healing visible as well as less visible wounds inscribed in the landscape. The Spring is the III part of the Wounded Land Trilogy (2010-2015) which includes Sea of Death (2010) and The Olive Tree (2012).

More specifically, the video The Spring (2015) is based on a sewing performance held at full moon in July 2013 by the spring of Lifta, a village where its Arab Palestinian women were notorious for their bridal dresses and artistic embroidering needle-works.

The sewing of dressed Wounded Land maps since 2009 came to embody a sick “patient“ in dire need of healing. The dressed maps are made of fragments from ‘Closure Maps of Jerusalem and the West Bank’ and were first ‘operated’ in 2004 in the midst of the Second Intifada as repeated suicide bomb attacks ripped apart the western side of Jerusalem. A protective wall was erected and while dramatically reducing terror attacks, it altered the movement of Palestinians entering the city from Ramallah and the West Bank.

Known in the Bible as Nephtoah, the village of Lifta was a border between the Israelite tribes of Judah and Benjamin. Populated by various people throughout ancient times, the village had been repeatedly invaded by armies on their way to Jerusalem. A prosperous village under the British Mandate, one tenth of the land was owned and inhabited by Jews and the rest by Arabs. Yet, Lifta was not spared in the wake of the Arab-Jewish hostilities of 1947- 48 as the Jewish paramilitary organization of the Haganah fought to secure the western exit of the city during the Siege of Jerusalem. The Arab villagers fled, never to return and Lifta eventually remained deserted.

Since, squeezed between two highways, the uninhabited village of Lifta, like countless vestiges of past civilizations in Jerusalem, stands as a silent wound in the landscape.

At full moon, in the deserted village of Lifta, to the sound of a magic flute, a woman sews by the pool a dressed map of Jerusalem she has found inside the spring. Evoking mythic weavers and Lifta’s seamstresses, her patient and diligent needlework brings to life the mummified spirit of the place that awakens at dawn, metamorphosing into a young maiden, the future weaver of life.

© All rights reserved to Ariane Littman

This Project was exhibited in