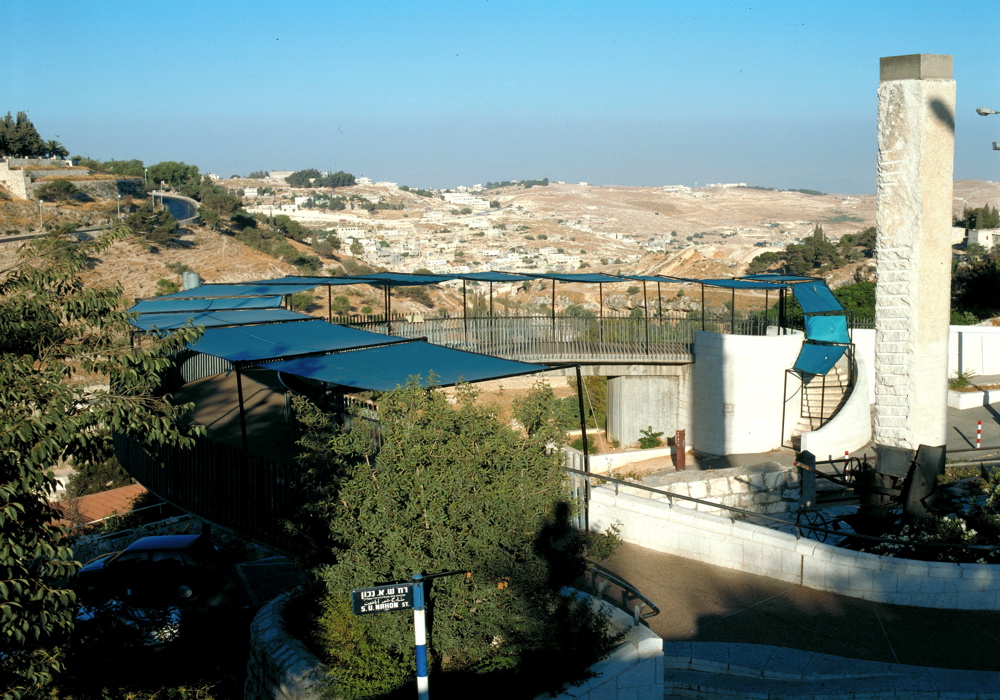 When invited by Susan Landau, curator of the Contemporary Art Department at the Israel Museum, to choose a site in Jerusalem for a work “in situ”, I felt from the outset that the Old City and the Judean Desert would be an integral part of it. I then set out on my quest, driving, walking, and taking pictures in search of the site that would inspire me.

It was on one of these occasions, in the vicinity of Mount Zion that I caught a glimpse of the Cinemateque bridge.
Erected in 1988, the bridge offers a panoramic view of Mount Zion and the Walls of the Old City, the Sultan’s Pool and Mishkenot Sha’ananim, while encompassing the dramatic drop of the Hinnom Valley stretching into the Judean Desert toward the Dead Sea.
From its infinite detail to its overall majesty, everything about this landscape was breathtaking. As I stood on the bridge I wished time would stand still for a short while, so I could indulge in pure contemplation.
I had found my site.

I envisioned a colored turquoise roof that would follow along the strong curves of the bridge, forming a protected lookout post. A telescope placed at that point would furthered the reach of human perception as I felt that this public omnipotent gaze, offered to anyone who inserts a coin in the telescope, satisfied our natural delight in voyeurism and scopic mastery.
The telescope fulfilled the naive function of touristic sightseeing while bringing to mind the military posts scattered along the borders, keeping in tune with Jerusalem’s sensitive history.

I also turned an existing semi-circle into a meeting place, shielded from the noise by large Plexiglas windows; benches were installed as well as a round table in which a chess board made out of local pine and olive wood was inserted. There, in a Duchampian spirit, I played checkers with Holy Land bottles full of precious water, soil, oil, and incense; ready-mades usually sold to pilgrims who wish to take back with them a piece of the Holy Land.
In a way, this performance taking place by the Walls was symbolizing History’s unpredictability.

“Ariane Littman-Cohen symbolized the “unbridged bridge” in an installation which she called “Temporary Observation Point“. This was situated on the B’nai B’rith Bridge leading to the Jerusalem Cinemateque and overlooking the Arab village Silwan. By Enveloping the bridge in blue polyester she changed the original view of the construction associating the new structure with an “umbilical cord” extending towards the east. Slabs of blue polyester were installed in space, reaching toward the desert landscape as the artist sent her sign language towards it.

It was a language which tried to communicate, to hold out abstract blue “hands” to the Arab village in order to create a new aesthetic which would bring the two parts of the city together. The messages were artistic ones as the pattern of the blue slabs associated with blue patches of color seemed to be reaching the other side. This reaching out was done on the aesthetic level, refraining from using conventional political rhetoric. An obvious wish was expressed: that art be a bridge between the two conflicting peoples on the two sides of Jerusalem.

The interior of the structure includes two stations: a telescope and a game of draughts (checkers). The game is played on a board bought in the Old City, and the players consist of ready-made bottles of four substances labelled respectively “Holy Water from the Jordan River”, “Earth from Holy Land” , “Holy incense from the Holy Land”; and “Olive oil from the Holy Land”.  The bottles are divided into opposing white and red groups. The game brings the two groups together while playing with and questioning the various myths. Who will win, who will lose, white bottles, red bottles? The red or the whites? Perhaps each will win or lose in turn? Winning and losing is reversible.

Littman-Cohen’s game replaces Duchamp’s chess game, which is masculine, by a game of draughts, which she labels with a play on the french, Jeu de Dames, with an ironic twist to give a feminine connotation. In colloquial Hebrew however, the game implies “eating” the opponent and thus it puns with biblical verse: “the land.. .is a land that eateth up the inhabitants thereof (Numbers 13:32), as in the spies’ report about the land of Israel. Through the linguistic associations the feminine game becomes the terrible archetypal mother earth, the devouring mother. So it is also a game playing with the various layers of meaning while moving from humor and irony to a solemn realization of the implications.
The game is played on an ideal turquoise circle- the archetypal shape which represents ideal Jerusalem in the three monotheistic religions.

The telescope overlooking the village turns to gaze into a means of overcoming alienation between the west part of the city and the Arab village. It emphasizes the position of the artist as spectator. It also comments on Ariane Littman-Cohen’s artistic language which is “cool” and is centered on the sense of sight (rather than on tactile values). It is the external reflexive approach which relates to inner thinking.

The telescope also projects a sense of power- those who are able to see further are those who control. “It enables to see further, to see even more, to look at the people in the village, how they hang their laundry, to get closer,” as Ariane Littman-Cohen says. And yet she adds: ” we are here, they are there and like in camera obscura we see things, yet remain detached from it- we remain outsiders”. Thus, it is false power, devoid of the real possibility of communicating. The aestheticism of the whole project stands in sharp contrast to its content, the aesthetic bridge remains unabridged. The gap between form and content constitutes the irony of the project.”

Milly Heyd, Jerusalem: Anti-Myth, in The Real and the Ideal Jerusalem in Jewish, Christian and Islamic Art, Jewish Art, vol. 23/24, 97-98, The Hebrew University of Jerusalem, edited by Bianca Kuhnel, pp.597-99

This Project was exhibited in